Sandy in the Desert: A Look into Dubai and Abu Dhabi 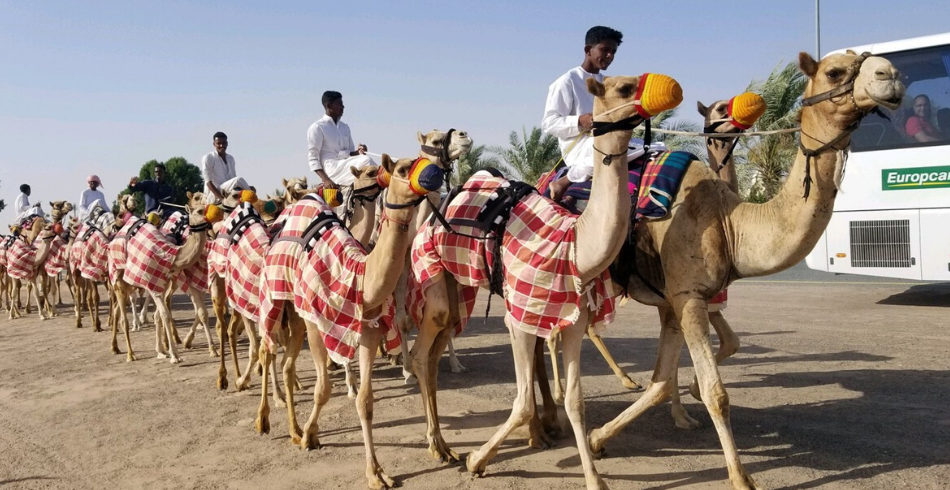 The UAE has a lot to brag about. The country is immaculately clean, it’s safe, it’s home to the tallest building in the world (Burj Khalifa), and the country is known to have more millionaires and billionaires than any other country.

Dubai and Abu Dhabi–the two main cities that attract the most tourism, are very different from one other. Abu Dhabi is rich in culture and history, while Dubai is much more modern, political, fast, fun, and wealthy. Wherever and whenever they can make improvements on something, they’ll do it and go a little bit over the top.

However, even though Dubai is very modern, their cultural and religious practices are still very conservative. The ladies are still elect to wear the traditional abaya―a long, black flowing light coat over their clothing, and they don’t date without their parents’ permission.

One of our veteran leisure agents and seasoned world travelers, Sandy Kulenkamp, visited the UAE for the first time earlier this spring. She told us that even though there wasn’t anything specific that she wanted to see or do, she was very delighted that she got to go, as this trip was one of her top bucket list destinations.

“The people are so proud of their history and our guide wanted the group to see everything. We moved around our pool and leisure time because there was always one more thing our guide wanted us to see which was neat,” explained Sandy of her guide and trip schedule.

Sandy shared with us some insight about traveling around the UAE and the highlights from her trip.

What’s the best way to get to the UAE from Detroit?

We flew on Delta into Abu Dhabi and we flew out of Dubai.

We left Detroit on April 28th, and our flight arrived at about 8:00 PM on the 29th. We changed planes in Amsterdam, and it was 7.5 hours there and another 7-7.5 hours to Abu Dhabi.

We had one woman in our group who flew in on Emirates. She was from the East coast, and she said it was an adventure getting there. Apparently on Emirates, if you’re going to Abu Dhabi from Dubai, they include the price of a local bus ticket in their airfare to transport you between the two cities. But she said when she landed, there was nobody there to tell her where to find the bus. Everyone spoke English and the signs were in English, but she still had a hard time finding the right bus, so that’s something to be cautious of and research before you go.

What hotel did you stay in? Which hotel would you have liked to stay in?

We stayed in Radisson Blu hotels in each of the cities which was comfortable, but it’s a chain hotel, and doesn’t match up to the beautiful luxury hotels scattered throughout Dubai. While we were there, we got to see the Emirates Palace. It was lovely, but I think the least costly hotel room that night was $2-3K. We also checked out the Burj Al Arab Hotel and the least costly lead-in room there was $6K a night. There are guards standing outside the gate, and you can’t even go up their driveway without a reservation. So, while it would’ve been nice to have stayed there, it was out of our price range unfortunately!

What’s the best way to get around the area?

Any group tour will take travelers around in a private coach, but if you’re traveling independently, it is suggested to take a taxi over an Uber. I can’t tell you why because it wasn’t explained to me, but that is what our guide told us. While we were there, we didn’t see any buses or subways, but they have trains similar to the L in Chicago.

What are some cultural customs to be aware of/sensitive to?

When you go to the mosques, you must dress the part meaning you keep everything covered: head, shoulders, and legs.

People don’t like their photos taken unless you ask them- which is the polite thing to do in any country, anyway!

Hugging or kissing is strictly prohibited. You could even get sent to jail!

What is the climate there and best clothes to pack?

It’s very hot. We’re talking 98-102 degrees every day, and in the evenings, it would cool down to 82-85 degrees. Because it’s the desert, it’s a dry heat, but that doesn’t make the heat any more bearable. To help keep cool, I would suggest very loose-fitting clothes. Jeans would be too hot, and as a tourist, below the knee skirts/shorts would be better. You can wear t-shirts, but no wife beaters, sleeveless tops, flags, or camo. Also, because you’re in the sun all day, sunscreen is a must and maybe a fan to cool yourself off throughout the day.

What’s your favorite thing that you ate during your trip?

The UAE is a Muslim country, so they eat halal- which means no pork. In general, UAE is not known for their meat. There’s a great deal of Mediterranean food and lots of grains, but the best thing I ate were the dates. They have the best dates I’ve ever had in my life, and they get very fancy. They stuff them with pistachios or wrap them with chocolate, but even the plain dates are fantastic. In America, we can’t buy fresh dates like they have there. They are so very good!

We were in Al Ain having lunch one afternoon and the waiters brought out this little dish. They were these little donut holes off a pyramid with date syrup on it. They were warm and oh my goodness, they were SO good. They melted in your mouth; they were just delicious.

Also, when we were in Dubai, we saw the Presidential Palace, and they had us in for pastries and cappuccinos. The cappuccinos here in America will sometimes have a heart design or something like that in it (from the milk), but at this specific stop, they actually drew the palace and placed edible gold leaf flakes on top.

We went to a falcon hospital! It’s this huge place where they do surgeries on falcons. I had no clue that falcons could be so costly. People pay up to 1 million Dirham which is about $400,000 to have them as a pet. The birds all have these hoods on, which helps them stay calm so that they don’t attack the other birds.

The staff brought one bird into the room with us and gave it a sort of pedicure because their talons got so long. They put a gas mask on its little beak to knock it out for the procedure, clipped their talons, used the Dremel to make it smooth, and then put some lotion on the pad of its foot. The staff also has a drawer of extra feathers that they’ll tie into the wings because falcons need a certain size and number of feathers in order to balance.

We got to hold the falcons on our arms! Being that up close to them was a real highlight for me.

One other thing we did was we took a drive in a driverless electric car at the Siemens Dubai office. It was VERY COOL. We rode in it underground, and the car can go up to about 40mph. It was a little eerie to think about having driverless cars on the road one day but a fun activity. What’s one fun fact about the UAE that people might not know?

The country is undergoing an insane amount of construction from the technological revolution they’re experiencing. Cement for construction takes sand- which I learned has to be imported all they way from Australia because the sand in the UAE is either too powdery (in the desert) or contains too much salt (along the water).

What is the currency and exchange rate? Are prices set or do you have to bargain/haggle?

$1 USD is roughly 4 Dirham. We bought gifts to bring home from the markets, or the souks as they call them, and they do bargain a little. However, I didn’t get the sense that it was a significant part of their culture.

Who is this trip good for?